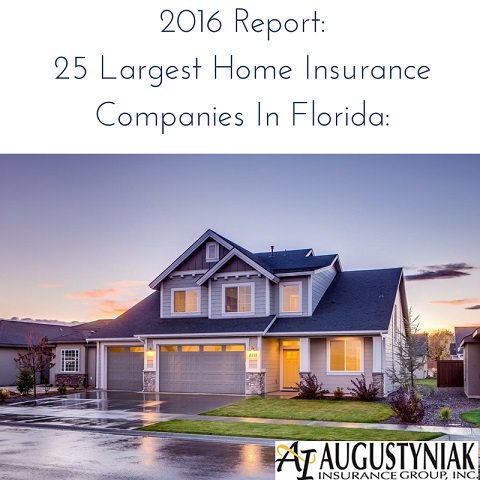 Major name brand companies like Nationwide and State Farm are missing from the list of the 25 largest homeowners insurance carriers. During 2004-2005, Hurricanes Charley, Ivan, Frances, and Jeane damaged large parts of Florida. Hurricane Katrina followed in 2006. Because of the damage Florida sustained during these hurricane seasons, large national insurance companies stopped writing homes for residents of the Sunshine State.  State Farm, Nationwide, Allstate, Hartford, Travelers, and many others also non-renewed clients homes to manage how much damage they might be responsible for if another hurricane hit our state..

Some companies have earned an AM Best rating as well.  One thing to remember is the size of company does not always relate to the quality. Citizens (the state run insurance company of last resort) remains the second largest. Universal Property and Casualty covers homes in Broward, Palm Beach, and Miami-Dade counties. a  place where many of the other companies decline to offer policies (other than Citizens).

Here's a List of Florida Homeowners Insurance Companies starting with the most number of in-force homeowners insurance policies as of Dec 31,2016.

Data as of Dec 31, 2016. Source: Florida Office of Insurance Regulation

How much does homeowners insurance cost in Florida?