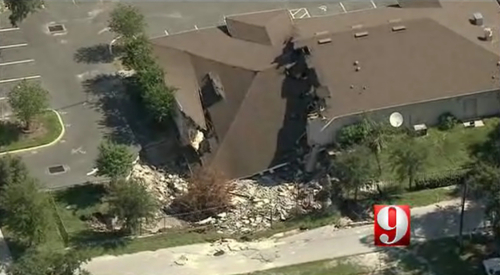 Sinkholes can cause major damage to properties in Florida. In 1981, in Winter Park, Florida a sinkhole opened up and swallowed a house and several nearby businesses. On June 27, 2011 a sinkhole swallowed part of a beauty salon in Leesburg, Florida. In fact, Florida has more sinkholes than any other state in the nation.

Sinkhole coverage has been part of most home and business insurance policies until 2011-2012. Before this, there had been a large number of claims being filed on homeowners insurance policies in Florida, particularly from Hernando, Citrus, and Pasco Counties. Many claims made under these policies resulted in houses being declared a total loss when there has been little to no damage visible damage to the home.

in 2011, Florida insurance law changed and  clarified the insurance definition of a sinkhole vs Catastrophic Ground Cover Collapse.

The law requires insurance companies to cover "catastrophic ground cover collapse," but damage caused by "sinkholes" may no longer be covered by your policy.

Under this definition, the damage caused by the 1981 Winter Park sinkhole or the 2011 Leesburg sinkhole would be covered under a homeowners insurance policy. The damages met all 4 criteria above.

What is Sinkhole Coverage?

There are many types of sinkholes that damage homes, but do not meet all 4 criteria above.   With the law change, the majority of the homes damaged by a sinkhole will not meet this “ 4 prong collapse” definition.  Read your insurance policies carefully.

It is now possible for your home to be damaged by a sinkhole, but  not covered.   For example,  let's say a sinkhole causes cracks in your walls, but there is not a depression in the ground, and your home was not condemned.  In this example, your home was damaged by a "sinkhole"  but not a "catastrophic ground cover collapse."  The insurance company would not pay if you only had the standard "catastrophic ground cover collapse."  However, if you had purchased and paid extra for "sinkhole coverage," the insurance company would pay to repair the damages.

All insurance companies licensed to do business in Florida automatically include catastrophic ground collapse coverage  in homeowners policies at no additional cost.

The cost of the sinkhole rider will vary in different areas of the state. For example in North Florida it may be as low as $50, while in in Central Florida run $300, and sinkhole alley (Polk, Hernando, Pasco, Citrus Counties) it can be $500+ to add this coverage.

What is a Sinkhole Inspection?

If you are buying a home, be sure that the house is insurable for sinkholes if this a concern to you. When you have the new home inspected, be sure to ask if the inspection will address any possible sinkhole activity, like cracks in the walls or foundations.

How many sinkholes are near me in Florida?

University of South Florida has a map program that will show how many sinkholes have been reported by each county in Florida. The maps are available by clicking here. Sinkholes are rarer in North and South Florida. Sinkholes occur much more often in Western and Central Florida. They are particularly common in Pasco, Hernando, Citrus, Marion, Seminole, Polk, and Lake Counties.

We know every home is unique. We can help you get the best price and value on your home owners Insurance rates. Call us today at 904-268-3106.